Indicia title is "Walt Disney's The Horsemasters, No. 1260." Code number is HORSEMASTERS O.S. #1260-6111. Copyright 1961 by Walt Disney Productions. Credits for this issue based upon Alberto Becattini's "Disney Index - Dell Comic Books" Vols. 1 and 2 (Italy, 1992 and 1994). There are different versions of this comic. Adapted from the two-part story "The Horsemasters" that aired October 1 and 8, 1961 on NBC's Walt Disney's Wonderful World of Color TV series.
On sale date is Library of Congress copyright record publication date.

The Horsemasters (Table of Contents) 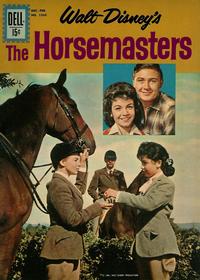 The Horsemasters (Table of Contents: 1)

Characters
Dinah Wilcox (as played by Annette Funicello); Danny Grant (as played by Tommy Kirk); Janet Hale (as played by Janet Munro)
Synopsis
Preview of the story as told in six stills from the movie.

The Horsemasters (Table of Contents: 2)

Adapted from the two-part story "The Horsemasters" that aired October 1 and 8, 1961, on NBC's "Walt Disney's Wonderful World of Color" TV series.

The Partnership (Table of Contents: 3)

Genre
non-fiction
Synopsis
Facts about horses and their working relationship with man.

The Hunt (Table of Contents: 4)

Back cover. Panels with typeset text underneath.