Mandrake the Magician: The Complete Series: The King Years #2
([December] 2016) 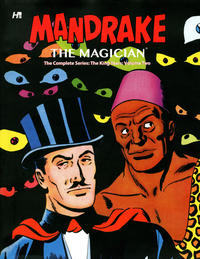 Mandrake - A Magician for the Ages (Table of Contents: 3)

Genre
fantasy-supernatural; science fiction
Characters
Mandrake; Lothar; Narda; Dargo; Felix; Ralph; Professor Beldon
Synopsis
Using hurricanes as a cover for their landings, 4 aliens come to Earth and infiltrate humanity. One alien, who has befriended Mandrake, realizes their conquest plans will succeed only if Mandrake is eliminated. They trick Mandrake into using his powers on himself, paralyzing him. Narda and Lothar manage to free Mandrake. Then he and Lothar defeat the aliens, making them forget their alien past.
Reprints

Genre
adventure; fantasy-supernatural
Characters
Mandrake; Lothar; Zamba; Doctor Olaf
Synopsis
Zamba, a boyhood friend of Lothar's, summoned the King via the drums. The Wambesi have been given a memory altering drug by a fake doctor wanting to loot the tribe. Lothar fights for his people's freedom -- with a little help from Mandrake.
Reprints

The Telltale Doll (Table of Contents: 10)

The Haunting of Hawk Inn (Table of Contents: 14)

The Magic Maker (Table of Contents: 16)

Tide of Treachery (Table of Contents: 17)

Genre
adventure; fantasy-supernatural
Characters
Mandrake; Lothar; Narda; Burke; Craven; Justin Shain
Synopsis
While on a vacation cruise along the North Atlantic coast of Canada, Mandrake, Lothar, and Narda become involved in a plot to force fishermen out of business in order to buy their property on Bundy Bay, a place of extreme high and low tides.
Reprints