In January 1962, Marvel was increasing prices from 10¢ to 12¢ and 3 series underwent last minute changes, those covers already printed were overprinted with a black circle and the 12¢ price positioned adjacently. The printing plates were corrected and the majority of the print run has the 12¢ price in an open circle. On-sale date from 1961 Periodicals, Copyright Office, Library of Congress.
This issue has variants:

The Genie with the Light Brown Hair (Table of Contents) 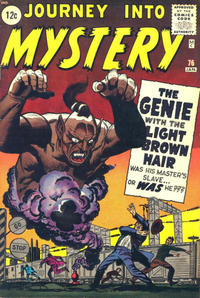 The Genie with the Light Brown Hair! (Table of Contents: 1)

Job Number
V-459
Genre
horror-suspense
Characters
Mike Morgan
Synopsis
A man finds a genie and uses it to fulfill his selfish whims. The genie finally persuades him to let him return to his bottle, but tricks him into allowing himself to be trapped there too.
Reprints

The last page includes an advertisement for the debut of Fantastic Four (Marvel, 1961 series).

Job Number
K-19
Genre
fantasy-supernatural
Characters
Eli Twiddle; Mr. Hardy
Synopsis
A travel agent has the ability to travel in his dreams, but eventually he grows out of it.
Reprints

Mind Over Matter! (Table of Contents: 3)

Job Number
V-460
Genre
drama; fantasy-supernatural
Synopsis
A thief meets a lama in the foothills of the Himalayas and is amazed by the feats that he can accomplish with yoga. When he considers using the lama's powers of disappearance for crime the lama uses them to will him into non-existance.
Reprints

Job Number
V-458
Genre
science fiction
Characters
Paul Lindsey
Synopsis
Space explorers are attacked by alien animals, and only make the situation worse by killing the largest beast, which was actually a robot holding the animals in check. They narrowly escape.
Reprints

Narrated in the first person. Job number from Tom Lammers and Ger Apeldoorn via the Timely/Atlas discussion group.

Job Number
V-461
Genre
horror-suspense
Characters
Joe Krane
Synopsis
A convict in a prison hospital is set to return to death row when he is better so he doesn't want the doctor to dismiss him. A fellow prisoner across the room has a window view and the convict is pleasantly surprised to learn that there are no bars on the window. He resolves to make a break for it after nightfall, but when he slips out the window, he learns the reason there are no bars is that the hospital room is several stories above the ground.
Reprints