Camy's signature is cropped from the GCD scan. It appears on the lower right, just below the red cape in the can at the Digital Comics Museum (https://digitalcomicmuseum.com/preview/index.php?did=229&page=1). 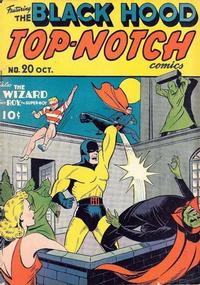 [The Mark of the Monster] (Table of Contents: 2)

Barbara reveals to Kip that she knows he's the Black Hood.

[Murder and Politics] (Table of Contents: 3)

First Line of Dialogue or Text
In a Russian border town, high in the mountains, the following scene is taking place...
Genre
spy
Characters
Fran Frazer (news-photographer); Hal Davis (reporter); Nazis (villain); Strunsky
Synopsis
Their car stopping in the mountains of Russia, Fran and Hal must find a place to spend the night, and stumble into a German-Japanese spy center.

Originally credited to Irv Novick, but the faces with narrow pointed ears are not his work, nor anything else.

The Whirling Dervish (Table of Contents: 6)

[The Sinking of the Shroud] (Table of Contents: 9)

Originally credited to Bernard Klein, but the faces, and hands with very long fingers, and narrow, pointed ears are not his work. The same unknown artist as on the Fran Frazer story in this issue.

First Line of Dialogue or Text
Why don'cha go back where ya came from ya refugee!
Genre
superhero
Characters
Nazis (villain); Kardak; Balthar; Heinrich; Butch
Synopsis
Kardak exposes a street ruffian to intolerance when he witnesses the bully abusing a refugee.
Keywords
Germany