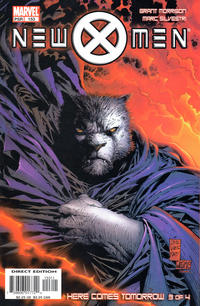 Here Comes Tomorrow 3 of 4: We All Have to Die Sometime (Table of Contents: 2)

Genre
superhero
Characters
X-Men (future) [Wolverine [Logan]; Three-In-One [Stepford Cuckoos]; Cassandra Nova Xavier [Ernst]; Martha Johansson [No-Girl]; E.V.A.; Beak [Tito Bohusk]; Bumbleboy (dies); Tom Skylark; Rover]; Sublime [Beast] (future); Hank McCoy (future; possessed by Sublime); Apollyon the Destroyer (future); Crawlers (future); Phoenix [Jean Grey-Summers] (future)
Synopsis
Phoenix, on Sublime's orders exterminates an insectoid race in Pan-Africa that she agrees is an evolutionary dead-end. But she encounters the X-Men's ambassador to them, and brings his consciousness back as an example of a viable species. Sublime thinks otherwise, and has sent a massive Crawler with a mental plague into the Institute, and an army of flying crawlers to intercept the X-Men's attack and kill the aquatic X-Man Mer-Max. As the Institute begins to fall and the X-Men at sea realize their long odds, the Phoenix joins the fray.
Reprints