Includes 10 pages of paid advertisements. On sale date as given in the copyright application as listed in the Catalog of Copyright Entries, Periodicals, July-December 1961, page 365, registration number B928097.
This issue has variants:

The Death of...Monstrollo! (Table of Contents) 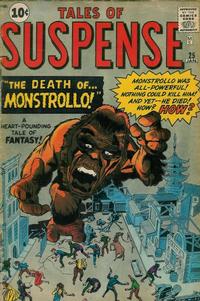 The Death of Monstrollo (Table of Contents: 1)

Job Number
V-442
First Line of Dialogue or Text
He was Monstrollo!
Genre
science fiction
Characters
Charles Hudson; Monstrollo
Synopsis
A movie producer's next film is a sci-fi picture featuring a giant robotic monster. Bad press convinces him to abandon the project but just as he's about to disassemble the robot, an alien invasion fleet lands. He sends the robot lumbering towards them and they ineffectively fire their nerve weapons at it. Next, they try gas, which of course has no effect on the machine either. Panicked, they flee to their saucers resolving never to return. People express their sympathy to the movie producer that all that money was spent with nothing to show for it, but he knows better.
Reprints
Keywords
gamma gun; movie set

Job Number
H-366
First Line of Dialogue or Text
The city suffered under the onslaught of the summer's first heat spell.
Genre
science fiction
Characters
John Tyler; Mary Tyler; Bobby Tyler
Synopsis
When a young boy builds a fan to help his family get through a heat wave it brings down the flying saucer that caused the heat.
Reprints

Text story with illustrations. The two pages of this story are not printed consecutively.

The Unseen (Table of Contents: 3)

Job Number
V-443
First Line of Dialogue or Text
You who are mortal cannot see me!
Genre
science fiction
Characters
Jason Wilkes; Jason Wilkes' sister
Synopsis
A scientist is contacted by a communist agent who offers him a million dollars for research into an invisibility ray. The man's greed makes him accept treason and he succeeds, but he finds that after testing the ray upon himself, he has become intangible as well and has no way of turning on the switch of the antidote ray.
Reprints

The Hidden Face (Table of Contents: 4)

Job Number
V-445
First Line of Dialogue or Text
Somewhere in the vast universe, a galactic...
Genre
science fiction
Characters
Wogu
Synopsis
An alien bigot attempts to preach hate by hiding his face under a hood. When he assaults one of the people he is defaming he flees the police to escape capture. When he attempts to remove the hood, he finds another underneath it. He tries again, and there is still another, always another hood. A policeman shakes his head sadly as he walks away from his cell, the bigot convinced he would never have been captured if not for all these hoods. He continues to remove hood after hood with his hands, but there is nothing there.
Reprints

This story is a retelling of "Men in Black" by Stan Lee and John Romita, Sr. from Menace (Marvel, 1953 series) #3 (May 1953). Interestingly, the original and prior tellings were not science fiction stories, and featured an ordinary, human, bigot. The distancing device of making the story a science fiction allegory may be a reflection of growing racial tensions.

The Enchanted Paint (Table of Contents: 5)

Job Number
V-444
First Line of Dialogue or Text
There were many great artists in the ninteenth century, but...
Genre
fantasy-supernatural
Characters
Hans Lubnik; Bertha
Synopsis
An untalented painter gains success when a gypsy gives him magic paints, but he becomes obsessed with beauty and abandons his lover. The gypsy casts another spell, making his former love seem beautiful to him.
Reprints