Includes 10 pages of paid advertisements. On-sale date is the publication date reported in U. S. Copyright Office filings.
This issue has variants:

The Man in the Ant Hill! (Table of Contents)

First Line of Dialogue or Text
Save me, somebody, save me!!
Genre
science fiction
Characters
Henry Pym (later known as Ant-Man)
Reprints 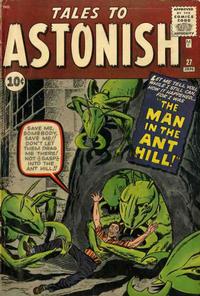 The Man in the Ant Hill! (Table of Contents: 1)

Job Number
V-430
First Line of Dialogue or Text
Living nightmares can begin in many ways!
Genre
science fiction
Characters
Henry Pym [Ant-Man (later)] (introduction, origin)
Synopsis
Henry Pym invents a shrinking serum, but is trapped in an ant hill when he tests it. He is attacked by several ants, but one of them helps him escape and restore his ordinary size. He destroys the serum because it is too dangerous.
Reprints

Job Number
V-431
First Line of Dialogue or Text
Bill Carter is an ordinary guy with ordinary problems...
Genre
horror-suspense
Characters
Bill Carter; Anne Carter
Synopsis
Bill Carter purchases a mirror for his wife's birthday. It turns out to be cursed and she falls under the control of an undead sorceror until the mirror is broken.
Reprints

The Talking Horse (Table of Contents: 4)

Job Number
V-432
First Line of Dialogue or Text
Go! Go! Go!
Genre
fantasy-supernatural; sports
Characters
Barney Sloan; Mike Jordan; Silverstreak
Synopsis
The horse Silverstreak convinces the abusive jockey Barney to bet on them winning the next race. When they lose, Barney is caught trying to beat the horse and kicked out of racing, before being beaten up by his bookie.
Reprints

Job Number
V-433
First Line of Dialogue or Text
Somewhere in the vast, endless universe...
Genre
science fiction
Characters
Grokor; Mopox
Synopsis
A warrior race conquers world after world, but on one of them there seems to be life but their warrior can find none and dies of loneliness. The world was actually inhabited by sentient rocks.
Reprints