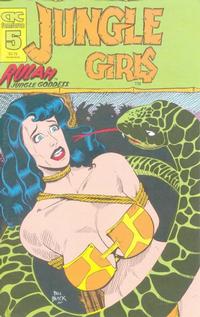 The Frenzy of the Dishonored Idol! (Table of Contents: 2)

Genre
jungle
Characters
Rulah; Borden (villain); Waloo, Nimba (servants of Borden)
Synopsis
Borden masquerades as Rulah to enter a temple and steal its rubies, with the help of Nimba. She overcomes Rulah but is seized by an ape. Rulah blows up the temple, saves Borden for the villagers' justice, and takes the rubies to buy medicine.
Reprints

Art credit from ZOOT COMICS #10 listing in GCD; in editorial, Black states "Although Matt Baker never drew a Rulah story, the art (by artists unknown) was done in the popular 'Baker style'."

The Kraal of Deadly Diamonds (Table of Contents: 3)

Genre
jungle
Characters
Tiger Girl; Abdola; N'Pogi, a potter; The Professor, Bones, Charlie (villains)
Synopsis
Tiger Girl saves blind potter N'Pogi from an attack by mandrills. Later, N'Pogi guides three white men to the Sun Temple of Takala, where they plan to steal jewels. They fight their way past giant tarantulas to discover the jewels are all fake. Meanwhile, Tiger Girl goes to N'Pogi's empty hut, where she is attacked by a leopard.
Reprints

The Ice Beast (Table of Contents: 4)

Genre
jungle
Characters
Rulah; Monstro the Sorceror, Gade (villains); Tombi (native boy)
Synopsis
Monstro brings Gade to the jungle with a weather machine, which they use to cause a heavy snow-fall. Rulah helps villagers sew heavy clothing, then sets out in search of Monstro. She finds him, he tries to kill her, she gets away and turns off the machine. With heavy western clothes on, Monstro dies in the resulting flood.
Reprints

Art credit from ZOOT COMICS #10 listing in GCD; in editorial, Black states "Although Matt Baker never drew a Rulah story, the art (by artists unknown) was done in the popular 'Baker style'."

Still from 1950s TV show (smaller version is in article in JUNGLE GIRLS #4). On back cover.