Genre
humor; children
Characters
Richie Rich; Freckles Friendly; Richard Rich, Sr.
Synopsis
Mr. Rich is angry upon discovery that a window in a room he was in, was destroyed while Richie and Freckles were playing baseball. The crack is in a dollar sign formation, and Mr. Rich suspects Richie is to blame. 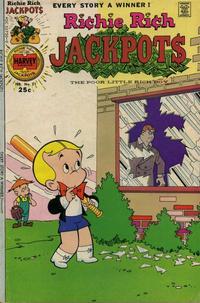 First Line of Dialogue or Text
What happened to make the lights blink, dad?
Genre
humor; children; crime
Characters
Rixhie Rich; Richard Rich, Sr.; The Shocking Lady; Regina Rich; undercover police officers
Synopsis
A series of electrical failures throughout the Rich mansion are happening, and it was later revealed that a burglar known as "The Shocking Lady" is committing robberies and uses electricity as her ultimate weapon. The burglar is among the ladies attending Mrs. Rich's ladies' club meeting, and she uses electricity to crack open a vault. When undercover police officers catch her in the act, the burglar zaps them to make them go away.
Reprints

Part 1 of a two-part story.

Also, this story was later adapted into an animated segment produced by Hanna-Barbera in 1980, with the unofficial title "The Shocking Lady Strikes Again" - but with some revisions.

First Line of Dialogue or Text
Is dad still at the new oil well site, mom?
Genre
humor; children
Characters
Richie Rich; Regina Rich; Richard Rich, Sr.
Synopsis
Richie wonders if his father is at the new oil well site, and Mrs. Rich informs him he is and that it is the day he is expected to strike oil. Despite arriving home covered with oil (except his hands), Mrs. Rich could tell it was her husband by observing the smile on his face.

The Electric Mystery, Part 2: The Shocking Lady (Table of Contents: 3)

First Line of Dialogue or Text
Wow! Touching that lady was like touching a live electric wire!
Genre
humor; children; crime
Characters
Richie Rich; undercover police officers; The Shocking Lady; Richard Rich, Sr.; Regina Rich
Synopsis
After an unsuccessful arrest, Richie chases the Shocking Lady to her hideout, which is inside the Rich Estate power house, where she needs to recharge. The burglar dresses as Sparky Sparker, the manager of the power house. Richie thinks something is off when he believes Sparky is entering a live generator. Richie shuts off the power, and the culprit decides to hunt for the meddler. But the culprit stunned herself by touching her head by accident, and the police captured her with rubber gloves.
Reprints

First Line of Dialogue or Text
You're going to enjoy your visit to my place, Richie!
Genre
humor; children
Characters
Richie Rich; Uncle Cautious; airplane pilot; Clivesworthy; Alvin (rubber crocodile)
Synopsis
Uncle Cautious is obsessed with safety and invites Richie to his mansion to show Richie how safe his mansion is.
Reprints

This story was later adapted into an animated segment produced by Hanna-Barbera in 1980, as the unofficial title "Welcome, Uncle Cautious", but with some revisions.

First Line of Dialogue or Text
The amount of mail we now receive is absolutely forcing us to do the "Mailbox" column more often.
Genre
children
Characters
Richie Rich; Lotta Plump; Regina Rich

First Line of Dialogue or Text
Isn't that great, Richie? My mother is giving a party for some little kids and I'll line up some dandy pranks to scare them silly with!
Genre
humor; children
Characters
Richie Rich; Reggie Van Dough; Vanessa Van Dough (mentioned); Cadbury
Synopsis
Reggie plans on playing pranks at a party his mother is giving for some children, but Richie wants to teach him a lesson by having Cadbury dress as an elderly woman who claims that Reggie is seeking a library person, but Reggie caught on to the tactic already. The woman is not scared at Reggie's pranks, but scares Reggie in return every time. Reggie decides to forfeit being at the kids' party after he got scared by a spider and later a monster in return. Reggie fired the woman, who was revealed to be Cadbury in disguise.
Reprints