Distributed to newstands in November 1961. This issue includes 10 pages of paid advertisements.

The Wax People (Table of Contents) 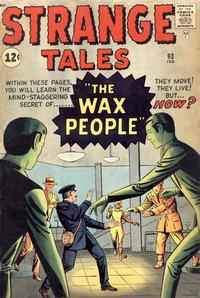 When the Thing Runs Amok! (Table of Contents: 1)

Job Number
V-465
Genre
science fiction
Characters
Jason Burke; Clara Burke; X-13
Synopsis
An inventor builds a robot, but others are afraid of it. The robot goes on a rampage and is dropped into the sea. It leaves a letter saying that it will emerge when humanity learns tolerance.
Reprints
Keywords
monsters

The Magician (Table of Contents: 2)

Job Number
G-719
Genre
fantasy-supernatural
Characters
Howard; Uncle Bart
Synopsis
A TV studio page and aspiring magician gets a lucky break when he meets a real sorcerer time traveling from the past.
Reprints

Earth Will Be Lost Tonight! (Table of Contents: 3)

Genre
science fiction
Characters
Steve Miller; "Don Russell"; Nan Miller
Synopsis
An agent signs a singer who is an instant hit. He discovers that the singer is an alien whose next record will help his people conquer Earth, and manufactures a scandal to ruin the alien’s career.
Reprints

Genre
horror-suspense
Characters
Miko Kyusha; Mr. Black
Synopsis
A Japanese youth doesn’t want to fight in World War 2. A stranger named Mr. Black saves him, but only so he will be where he was fated to be in 1945, in Hiroshima as the bomb falls.
Reprints

The Wax People! (Table of Contents: 5)

Job Number
V-468
Genre
science fiction
Synopsis
The mannequins in a store come to life in a creepy atmosphere as it closes. However, this is not thought odd by anyone, because on this alien world all people are made of wax, and some work as mannequins, but leave with everyone else at closing.
Reprints