Distributed to newsstands in November 1961 (November 9 according to Joseph Marek's Marvel Comics Group history website, November 21 according to Bob Bailey). This issue includes 10 pages of paid advertisements.
On sale date as given in the copyright application as listed in the Catalog of Copyright Entries, Periodicals, July-December 1961, page 365, registration number B934596.

The Thing That Crawled by Night! (Table of Contents) 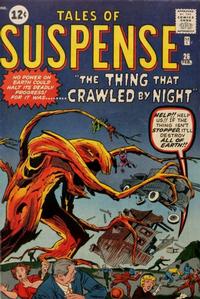 It Crawls by Night! (Table of Contents: 1)

Job Number
V-478
First Line of Dialogue or Text
Most men work for themselves, but there are other...
Genre
science fiction
Characters
Jed Hanson; Bobby Hanson; Ann Hanson; Fred; Tommy; Spot (dog)
Synopsis
A farmer develops a plant that grows so quickly at night that it becomes a menace to all objects around it by crushing and tossing them. The farmer feels he is done for as he runs to hide behind a meteorite that fell from the sky earlier in the day, but as the plant touches the rock, it begins to shrivel and die. The farmer and his son along with the neighbors quickly use tools to break up the meteor and apply it to the plant thus saving themselves.
Reprints

The last page includes an advertisement for the Fantastic Four (Marvel, 1961 series) by Lee and Kirby. Script added by Bob Bailey, 12 August 2005 (Per Sandell ed.)

Job Number
G-804
First Line of Dialogue or Text
Joe was one of the regulars with the popular Rhythm Makers orchestra.
Genre
fantasy-supernatural
Characters
Joe; Gus; Angelo
Synopsis
A struggling band takes on a poor but talented young harp player who turns out to be a young angel studying on Earth.
Reprints

Job Number
V-479 ?
First Line of Dialogue or Text
Observe this hideous creature!
Genre
science fiction
Synopsis
Communist spies plan to fake a Martian invasion, but they are abducted and killed by the real Martians, afraid that their cover will be blown.
Reprints
Keywords
Mars; New York

Job Number
V-480
First Line of Dialogue or Text
Vince Jordan is a racketeer!
Genre
crime; horror-suspense
Characters
Vince Jordan
Synopsis
A racketeer breaks a mirror and gives up crime for seven years, only to break another mirror in his first robbery and be caught and sentenced to seven years.
Reprints

Job Number
V-481
First Line of Dialogue or Text
India! Land of mystery, land of enchantment, land of...
Genre
horror-suspense
Synopsis
A thief steals a ruby from an Indian Lama's temple and finds himself cursed to see the Lama's face everywhere he goes. He tries to get out of the country by train, but still finds himself pursued by the face. Panicked, he pulls the emergency stop cord on the train and leaps out. Unfortunately for him, the place he chose to stop the train happened to be just as it was crossing a high trestle bridge.
Reprints
Keywords
India