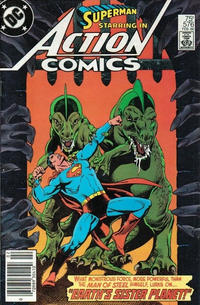 Job Number
S-4718
Genre
superhero
Characters
Superman [Clark Kent]
Synopsis
Superman battles the leader of a planet that used to be in our solar system where dinosaurs are sentient and dominant. The leader wants to obliterate humanity. His son, however, plots to save the humans, with Superman's help.
Reprints

The "Monumental" Menace of Metropolis! (Table of Contents: 2)

However, in comments on an article on the ComicBookResources website on early works by Mark Waid (published on 2011-03-12), Mark comments that "[This story] was bought and then rewritten from top to bottom by assistant editor E. Nelson Bridwell. And when I say 'from top to bottom,' I mean, no kidding, every single line of dialogue and half the panel descriptions were blue-penciled (Nelson sent me a copy of the edited script to learn from, and I still have it–he actually worked harder on it than I did, I think!). All of the balloons and captions–every one–was rewritten to tell us what we could already see was happening in the art. An entire subplot about the cabbie was edited in. Very little survived." He goes on to say he's fine with that; it was the style for this book at that time.