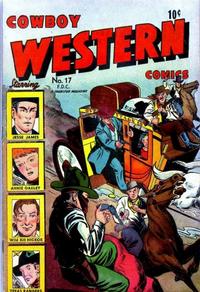 Inside front cover.
JVJ has Lee Sherman on this, and comparing the artwork with other stories signed by Sherman, confirms it.

Signed "TEX" alongside the left boot of the nearest rider. He is not credited to western at Charlton by Jerry Bails' Who's, but the artwork compares well with signed (Tex Blaisdell) work on "Prairie Kate" in St. John's "The Texan" #9. Also credited to Blaisdell by JVJ.

Orlando is credited on Charlton's Annie Oakley by Jerry Bails' Who's Who, and the artwork here is identical to his signed story in Cowboy Western #18. Also JVJ has Orlando credited as most probable here.

JVJ has Lee Sherman as a most probable, and comparing his art in the signed story in #18, there can be no doubt.
This is the only appearance of the "Texas Trail" feature.

Twain Shall Meet (Table of Contents: 5)

JVJ has Harmon credited with "?" The inking is not exactly identical to the signed story in #19, but near enough to be likely.

The Action Story of Wild Bill Hickok (Table of Contents: 8)

There appears to be a signature in the lower right corner, which is hard to read but appears to be "L.B."?
As the art is identical to Lee Sherman's work, the signature most probably is "L.S".

A Tale of the Texas Rangers (Table of Contents: 10)