JVJ has Battefield as most probable, and he is credited on pencils to covers at Charlton by Jerry Bails' Who's Who. 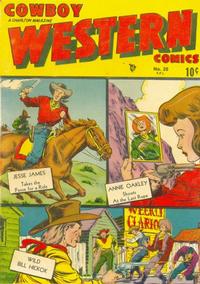 First Line of Dialogue or Text
I tell you, sheriff, you never saw anything like the...
Genre
western-frontier
Characters
Annie Oakley; Frank Butler
Synopsis
The mayor is shot at and Frank is accused of the act.
Reprints

JVJ has Orlando as most probable, and faces with eyes far apart looks like his signed Oakley story in #18. Orlando is also credited on Charlton's Annie Oakley by Jerry Bails' Who's Who.

Art identical to signed Sherman work in other issues.

The Sons of the Pioneers! (Table of Contents: 6)

First Line of Dialogue or Text
Tumbleweed! Why do yo' always run from everybody?
Genre
humor; western-frontier
Characters
Tumbleweed Tom; Lucy
Reprints

Billy the Kid (Table of Contents: 11)