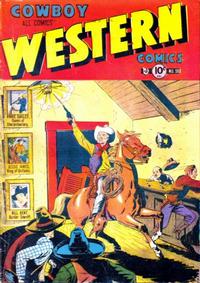 Brands and Branding (Table of Contents: 1)

South of the Border (Table of Contents: 2)

JVJ has Homer Fleming, and it compares very well with a signed page from DC's "Buck Marshall, Range Detective" and one from Gilberton's "Tom Brown's School Days". He is not credited to Charlton Jerry Bails' Who's Who.
Continued in next issue
This is the only story for the "Bill Bent Border Sheriff" feature -- it's a two-part story over two issues, but only one story.

Dressed To Kill (Table of Contents: 5)

JVJ has "Thompson ?" on this, but not very much like his two signed stories in New Heroic Comics #90. Another suggestion by JVJ is "more like Lee Ames", but he has hands with "interupted" lines between the fingers (Avon's "King Solomon's Mines"), and that is not present here. Inking here also has more black shadings.

The Branding Counterfeiters (Table of Contents: 7)

This is the only story for the "Ranger Ridley of Shadow Valley" feature.

The Rodeo (Table of Contents: 8)

Inside back cover. The bottom half of the page is promo for 8 Charlton comics being published at this time.