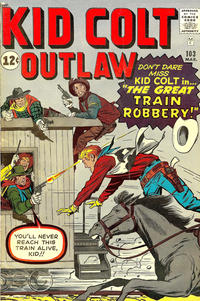 Text story with illustration. The first page appears after page 5 of “The Great Train Robbery”. The second page appears between the two ad pages which are located between the stories “Hoofbeats of Doom” and “The Menace of Bulldog Yates”.

Zack Krull, the Man Who Outdrew the Kid! (Table of Contents: 5)

Hoofbeats of Doom! (Table of Contents: 9)

Job Number
V-549
Genre
western-frontier
Characters
Cassidy
Synopsis
A man tracks down a magnificent wild horse, but decides not to capture it when the horse saves his life.
Reprints

The Menace of Bulldog Yates! (Table of Contents: 13)