When the Space Beasts Attack! (Table of Contents) 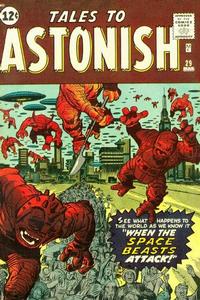 When the Space Beasts Attack!! (Table of Contents: 1)

First Line of Dialogue or Text
Laughter can express many different things!
Genre
science fiction
Characters
Jeb
Synopsis
An alien armada lands on Earth with weapons that seem to disintegrate anything. Humanity is helpless before the aliens, until they demand a man vacate his farm in order to make way for a spaceport. The farmer gets so angry he lays the alien out with the butt of his rifle. The aliens disintegrate things like trucks and houses, but they don't fire at people. Once the farmer realizes this and spreads the word, the aliens retreat from the human's firearms.
Reprints

The Clock (Table of Contents: 2)

Job Number
K-9
First Line of Dialogue or Text
The snow fell quietly in the little Alpine village, and...
Genre
fantasy-supernatural
Characters
Franz Ammergau; Gerda; Dr. Schmitt
Synopsis
An old clockmaker nearly dies from the cold, but is saved by the wooden figures adorning his clocks, which he has given parts of his own soul.
Reprints

The Man Who Blew Up the Earth! (Table of Contents: 3)

Job Number
V-498
First Line of Dialogue or Text
There it is--spinning in its orbit as it has done for 2 billion years!
Genre
science fiction
Characters
Elias Cragston
Synopsis
A jilted Quasimodo-like scientist devotes all his energy into producing a cobalt bomb which is so powerful that it can shatter the Earth. He wants to destroy all of mankind for jeering at his ugliness. He sneaks on board a rocket that is going into orbit and releases the bomb, but forgot about the lack of gravitational pull, and so the bomb just remains in place until it detonates against the side of the rocket. On Earth, the woman who laughed at him when he proposed marriage, gazes skyward at the explosion and exclaims "Isn't it the most beautiful sight you've ever seen?"
Reprints

Apparently whoever wrote this story thought that the ending was uplifting. The last page includes an advertisement for Fantastic Four (Marvel, 1961 series), also drawn by Kirby.

What Happened to Harry? (Table of Contents: 4)

First Line of Dialogue or Text
Ever see a timid soul?
Genre
science fiction
Characters
Harry Brown; Albert Poole
Synopsis
A brilliant inventor's boss tries to steal his new time machine in order to take credit for it. He uses the time machine to travel to a different time, but ends up in the prehistoric period, where the electricity to power the time machine cannot be found.
Reprints

Though many details are changed, this story is a retelling of "Behold! I Am the Master of Time!" drawn by Steve Ditko in issue #14 (December 1960).

The Last Laugh! (Table of Contents: 5)