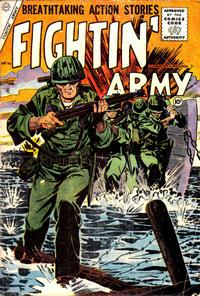 Flight Of Fancy (Table of Contents: 1)

Art credits updated to recognize that the Toby original was signed by Mel Keefer. In this reprint Charlton's production staff (probably Dick Giordano) systematically reduced the breast size of Lotta throughout the story, and gave the dream-sequence character Maria a much less revealing outfit.

first page of story says "continued on inside back cover" but it is on the flip side of that page.

Errand Of Mercy (Table of Contents: 3)

Art credits updated to indicate that in both Toby printings of the story the splash panel is signed by Mel Keefer; the Charlton production staff appears to have eradicated this signature. Two changes were made to this story to appease Comics Code Authority censors: (1) the stretcher that Quigley uses on both pages one and four to knock back the North Koreans is eliminated, leaving him looking like he's doing this all with his bare hands; (2) the beautiful female war correspondent on page two has suffered a significant breast reduction.

The Mysterious Idol (Table of Contents: 4)

Multiple changes (aside from the name change) made to this story when Charlton reprinted it in order to satisfy Comics Code Authority censors. These include text changes as from "News Flash! Man-eating idol swallows Marines!" to "News Flash! Marines disappear!"; and illustrations removing the bullets that severely wound a Marine on page six.