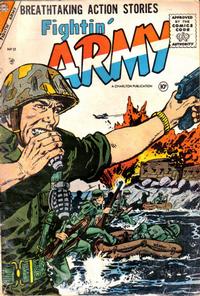 The Search for Kee (Table of Contents: 1)

Has statement of ownership and management on page 4 which lists title as Soldier and Marine Comics with editor being Burton M. Levey.

Courage in the Skies (Table of Contents: 3)

Credits updated as per more correct entry in original story. When reprinted Charlton drastically changed this story. The note on page one "A Bloody Saga of War Fury" had the word "Bloody" removed. Throughout the story sound effects and rifle discharges were removed. In the final sequence the Sarge and the Kid now fall off the cliff when they are discovered rather than being shot off the cliff by enemy fire. The largest change, however, is that the "Dear John" letter to the Sarge on the last page is changed from a letter from his wife telling him the divorce is final and his kids have been placed in an institution because her new husband George doesn't want them ... to a letter advising him that his wife died three days before posting and that his kids are in a institution awaiting his return from the war.