First appearance of the trademarked Green Lantern logo used in many variations over the decades. Patent and Trademark Office trademark serial number 444,484. Filed for trademark protection for magazine publication by All-American Comics, Inc. of New York, New York on June 13, 1941. All-American claimed to Patent and Trademark Office that the logo had been in use since May 1, 1941 (from the Official Gazette of the United States Patent Office, Volume 529, Number 2, August 12, 1941). 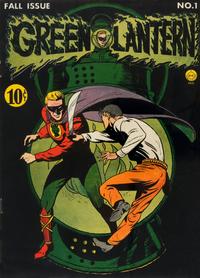 Genre
superhero
Characters
The Green Lantern [Alan Scott] (origin retold); Chang (lamp maker, un-named in the story, death); Mr. Billings, un-named in the story)
Synopsis
Engineer Alan Scott survives an explosion during a test crossing of a trestle bridge and learns he was saved by the green lantern he carried. The lantern tells how long ago a meteor was formed into a lamp by a Chinese lampmaker and how it protected him from his murderous neighbors. Later the lamp was found by an asylum inmate, who re-formed it into a lantern and was cured of his insanity by the lantern. Now it brings power to Scott, who forms a ring out of part of it and uses his new abilities as Green Lantern.
Reprints
Keywords
green lantern (called the green lamp); oath; power ring

The Masquerading Mare! (Table of Contents: 3)

Genre
superhero
Characters
Green Lantern [Alan Scott]; Irene Miller; "Scar" Jorgis (villain); Slink (villain); Gerald Davis (villain)
Synopsis
When Irene Miller inherits a racehorse named Jersey Queen, racketeer "Scar" Jorgis tries to buy it to keep it out of competition. Failing that, he tries to cripple the horse, but Green Lantern puts an end to that plot. Finally, Jorgis gets Irene's cousin to convince her to enter the horse in a "claiming race," and Irene loses ownership of Jersey Queen to Scar. After GL reclaims the horse, he forces confessions out of Scar and Gerald and returns Jersey Queen to Irene.
Reprints
Keywords
APEX Broadcasting; green lantern (called the lamp of power); Jersey Queen; oath; power ring

G.L. uses his ring to blind a gangster unless he talks.

Will Power Is the Flame of the Green Lantern! My Flame Shall Be Yours If You Develop Will Power! (Table of Contents: 4)

This features does NOT appear in the Golden Age Green Lantern Archives Volume 1 (1999). Writer credit added by Craig Delich.

Arson in the Slums (Table of Contents: 7)

Genre
superhero
Characters
Green Lantern [Alan Scott]; Irene Miller; un-named Fire Department Chief; Mrs. James; un-named Fire Inspector; un-named "Daily Tattle" reporter; Commissioner Grey; Mrs. Grey; un-named Grey children; Mr. Barton (villain, publisher of "The Daily Tattle"); Murker (villain); Gorley (villain)
Synopsis
As a series of fires breaks out in the tenements of Capitol City, Barton, the publisher of the Daily Tattle, campaigns for the razing of the slums. But when the fire inspector uncovers evidence of arson, a Tattle reporter overhears Barton conspiring with real-estate man Murker, and a commissioner accuses Merker of his crimes, Green Lantern must swing into action to save the fire inspector and reporter from murder attempts and free the kidnapped family of the commissioner before tricking a confession out of Barton.
Reprints
Keywords
APEX Broadcasting; green lantern (called the lamp of power); oath; power ring

First Line of Dialogue or Text
I hear they's a drummer over to Burke's Hotel...
Genre
humor
Characters
Adeline

This filler does NOT appear in the Golden Age Green Lantern Archives Volume 1 (1999). Letterer credit added by Craig Delich.

Trailers of Treachery (Table of Contents: 11)