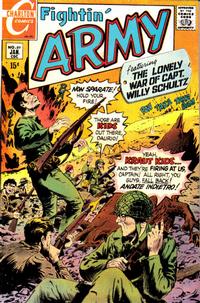 The Cross of Iron (Table of Contents: 1)

The series protagonist's name is misspelled in the splash panel -- "Capt. Willy Shultz." Story credits appear at the bottom of the last panel of the story.

Last Man Out (Table of Contents: 5)

Artist's signature on the splash page appears to be that of Olivera, although it is hard to read.