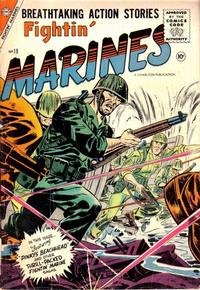 Job Number
S-900
Genre
war
Synopsis
Story of an unambitious Marine ("Pinky") who is seen as lazy or a loser until all of his squad mates are pinned down or wounded in the invasion of an unspecified island late in the war, at which point he takes over, saves them, and holds the position. After which he is transferred, and all the others who turned out to be less brave than they thought spend their lives wondering what happened to them. In the last panel they decide to publish their story to see if it turns up their old friend.

The middle of the story becomes almost incomprehensible. Between pages three and four the characters go from advancing in line with the rest of their company to being cut off in a position so isolated that Pinky has to run a gauntlet of fire to carry the wounded back to the main lines. Later, an ambiguously written sentence seems to suggest that the protagonists are soldiers, not Marines.

Job Number
S-699
Genre
war
Synopsis
"Butterball" is the chubby Mess Sergeant, a veteran of Saipan, who--despite his weight--proves not only able to lead his platoon in combat in Korea, but also to win the beautiful nurse.

Job Number
S-662
Genre
war
Synopsis
PFC Clint Bolden seizes on the chance to get out of KP for a special mission, which turns out to be a desperate attempt to kidnap a Chinese general behind enemy lines in Korea. Even though the mission succeeds (Bolden himself captures General Ho), Bolden is more than happy to return to mess duty.

A Sure Thing (Table of Contents: 4)

Tightwad Tad was among the characters and material purchased from Fawcett.

The Neatest Nurse in the Navy (Table of Contents: 6)

Quigley and Beals were purchased by Charlton from Toby; they had previously appeared in "Fightin' Leathernecks"

Genre
humor
Synopsis
Generic cartoons, one of which is military related.