The Mightiest Jap Of Them All (Table of Contents)

Cover images taken from inside story. 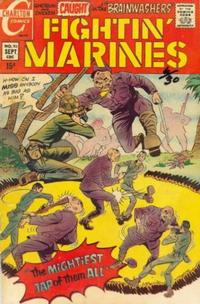 Unlike the usual crude, fake "Japanese" found elsewhere in Charlton's war stories, this story uses actual Japanese in the soldiers' dialog on page 3, panel 2. Unfortunately, it was apparently lifted from a travel brochure, and has nothing to do with the story. First soldier: "There are three flights per week to Osaka." Second soldier: "Even then, the world's most experienced air association."

The Brainwashers (Table of Contents: 2)

The Mightiest Jap of Them All (Table of Contents: 4)