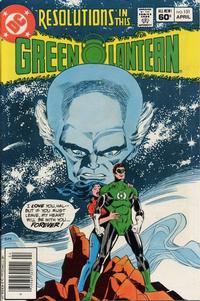 Job Number
J-8003
Genre
superhero
Characters
Green Lantern [Hal Jordan]; Flash [Barry Allen] (cameo); Goldface; Benjamin Bloch; Carol Ferris; Carl Ferris; Ted Bishop; Wendall; Richard Davis; Bruce Gordon
Synopsis
Green Lantern is given 24 hours to wrap up his personal affairs on Earth before the Guardians sent him to other parts of his space sector. He captures Goldface, and puts an end to the Bloch brothers' plots, and he and Carol profess their undying love for each other.
Reprints

The plot-lines for the next few issues revolve around science-fiction space adventures, without the traditional supporting cast on Earth.