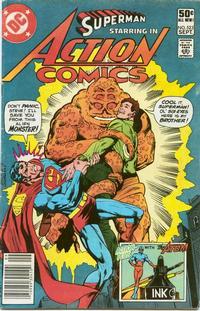 The Eye of the Storm! (Table of Contents: 3)

Job Number
S-3686
Genre
superhero
Characters
The Atom [Ray Palmer]; Ray Palmer's father; Mary Palmer (Ray Palmer's mother); Professor Hyatt; Jean Palmer [Jean Loring]; The Calculator [Noah Kuttler] (villain)
Synopsis
The Atom is sent back in time, where he is involved in the incident that led to his parents meeting. Back in the present, Atom is able to get Professor Hyatt to help defeat the Calculator.
Reprints

Letters of comment from Tim Wahowske and Mark Amundsen.