Per Tom Feister, he and Tony Harris worked co-operatively on all three aspects of their Legion artwork. 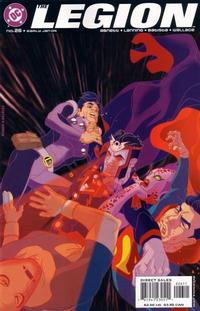 Though by the end of the storyline the identities of Clark Kent, Firestorm, Lobo, Orion, and Big Barda are confirmed, it is never made clear just who the Green Lantern, the Thanagarian, or the other heroes the servants of Darkseid collect are.