When an Outlaw Escapes! (Table of Contents) 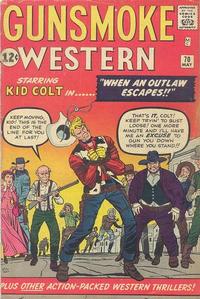 When an Outlaw Escapes! (Table of Contents: 1)

Job Number
V-710
Genre
western-frontier
Characters
Kid Colt; Monk Mango (aka Big Montana; first appearance); Sam Hobbs; Martha Hobbs; Steel
Synopsis
Colt lets Sam turn him in for the reward on his head, then escapes and catches the outlaw Big Montana so the sheriff can collect a reward on him.

Way Out West (Table of Contents: 2)

The Return of Darrow, the Gunfighter (Table of Contents: 3)

Genre
western-frontier
Characters
Dave Darrow; Crugg; Lefty; Mr. Darrow
Synopsis
Crugg once killed Dave's father when he took the Darrows' land. Dave returns for revenge but doesn't start a fight with Crugg. Once Crugg gets reckless, Dave reveals he was waiting until there were no innocent bystanders around, then shoots the guns, belt and buttons off of Crugg. Crugg gives Dave his land back and admits his crimes, which was what Dave wanted all along.
Reprints

Same story as "Draw If You Dare" in Western Outlaws #18.

Job Number
V-678
Genre
western-frontier
Characters
Slade Natchez; Moose Mangum
Synopsis
Moose prepares an ambush for Natchez but Natchez slips by in disguise, then gets the high ground above Moses and his gang, arresting them all.

Sinnott pencils per Nick Caputo, who notes that Sinnott occasionally ghost pencilled for Reinman. Job number from Tom Lammers and Ger Apeldoorn via the Atlas/Timely discussion group.
Same story as "Bull Morgan... He Ambushed the Man from Natchez!" from Western Outlaws #18.

The Montana Kid! (Table of Contents: 6)

Job Number
V-679
Genre
western-frontier
Characters
Montana Kid; Juke
Synopsis
The Montana Kid saves a sheriff from Juke. Later, the sheriff has to arrest the Kid and the Kid lets the sheriff beat him to help his reputation. Unknown to the sheriff, the Montana Kid is his son.