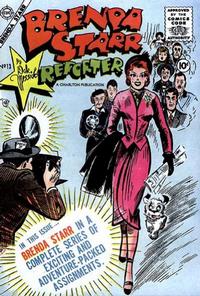 First Line of Dialogue or Text
Because of her first name, many persons think Dale is a man
Genre
biography
Characters
Dale Messick (photograph)

Dale Messick's comic strip "Brenda Starr" debuted on June 30, 1940. It was an unusual blend of such diverse elements as soap-opera, adventure, mystery, fantasy, and even science fiction. Dale Messick was one of the first successful women cartoonists in the world. She retired in 1980.

For Tops in Entertainment Read the Following Approved Comics (Table of Contents: 3) (Expand) /