Cover art with different coloring is taken from panels of interior stories. 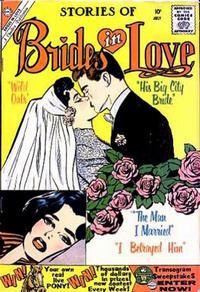 Job Number
6562
Genre
romance
Synopsis
Claire marries John Clifton and they go to his hometown to live. As she meets John's old friends, Claire learns that John had a reputation as the town's prize Lothario before they were married. Claire's jealousy about his old flames increases until she sees John go into a jewelry store with one of his previous girlfriends. As she begins to pack her things to leave, John returns to present Claire with an anniversary present from the jewelry store that the old girlfriend had helped him pick out.

The artwork for the first panel on the splash page of this story was also used as the main picture on the cover. The cover uses different coloring and the background characters were removed for the cover, but otherwise it is the same art.

Genre
romance
Synopsis
After marrying Chad Wallis, Luella moves from her quiet small town to the city where Chad was from. In the city, Chad returns to the fast life of gambling at horse races and poker. Luella decides to join in the lifestyle of the fast crowd her husband spends time with. When Chad sees the change in Luella, he announces he is going to work for her father and they return to the small town life.

The Man I Married (Table of Contents: 3)

Job Number
6532
Genre
romance
Synopsis
Gorgeous Myra Sheldon could have had any man she wanted. No one can understand why she marries plain, shy Adam Maynard, a museum curator. But Myra had become tired of the party life. When Myra got to know Adam, she discovered someone who shared her secret desire for reading and thinking about life.

The inset art on the cover is taken from one of the panels in this story.

The Missing Invitations (Table of Contents: 4)

Genre
romance
Synopsis
Dorothy Brand plans a party for her daughter, Ellen, but no one claims to have received the invitations. She complains to the Post Office and a Postal Inspector, Howard Keeby, is sent to investigate. He discovers that the invitations where placed in a trash receptacle around the corner, not a similar-looking mail box. But the investigation is the trigger that causes Howard and Ellen to fall in love.

I Betrayed Him (Table of Contents: 5)

Job Number
6414
Genre
romance
Synopsis
On the last night of the honeymoon for Bill and Laura, Laura starts having doubts about whether they really love each other. But when they get home and Bill kisses Laura after carrying her across the threshold, her doubts are gone.