The Mummy's Secret! (Table of Contents) 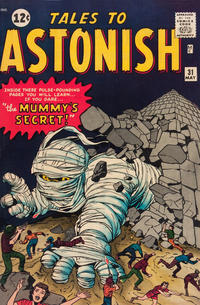 When the Mummy Walks (Table of Contents: 1)

First Line of Dialogue or Text
Behold the great Egyptian desert, for it is here that I dwell!
Genre
science fiction
Characters
Paul Kentworth; Gloria Carstairs; Jason Wilkes; Mr. Carstairs; Lord Randolph; Giant Mummy
Synopsis
An archaeologist uncovers an ancient mummy, which is actually an alien invader that locked itself in the pyramid. It bursts out, but it turns out that the mummy forgot that it sealed itself in to protect himself from Earth's atmosphere, which kills it.
Reprints

The Strange Stone (Table of Contents: 2)

Job Number
H-401
First Line of Dialogue or Text
When Johnny came to the open field, he couldn't resist the...
Genre
fantasy-supernatural
Characters
Johnny
Synopsis
Johnny finds a magic wishing stone, but wishes it away because magic would make life no fun.
Reprints

It Fell from the Flying Saucer! (Table of Contents: 3)

Job Number
V-609
First Line of Dialogue or Text
It all begins as just an ordinary day in the park!
Genre
science fiction
Synopsis
An artist finds an alien pencil that will make whatever he draws real, but his selfish use of it makes the aliens take it back.
Reprints

Job Number
V-611
First Line of Dialogue or Text
You've heard about rich, spoiled brats!
Genre
horror-suspense
Characters
Nastiwell Snide; Bela
Synopsis
A rich weakling pays a witch to give him muscles of iron, but her spell makes him sink right through the Earth's surface.
Reprints

The Pretender! (Table of Contents: 6)

First Line of Dialogue or Text
We don't claim that it is, but this story could be true!
Genre
science fiction
Characters
Stephen Dwane; Kusoom
Synopsis
A man looking through an abandoned house find notes in an alien language. They tell of an alien shapeshifter disguised as a human to undermine Earth before an invasion, and are accompanied by a photograph of the alien's human form, Soviet Premier Nikita Kruschev.
Reprints