Lair of the Winged Fiend (Table of Contents) 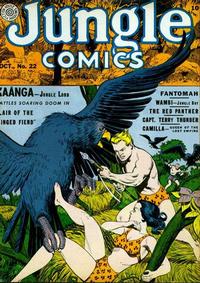 Lair of the Winged Fiend (Table of Contents: 1)

first line: "High above the jungle, in the branches of massive trees, is the domain of Zuko, the bird king..."

First Line of Dialogue or Text
Glamor girl pilot off on jungle jaunt.
Genre
adventure; fantasy-supernatural; jungle
Characters
Tabu; Trina Tarrington (glamour girl); village warriors (villains)
Synopsis
A young glamour girl crash lands on a volcanic island. Tabu comes to rescue her, but both are captured by some warriors from the "smoking mountain" who plan on sacrificing them to the volcano. Tabu uses his magic and causes the volcano to erupt and kill the natives.
Reprints
Keywords
airplanes; bondage; human sacrifice; newspapers; stereotyping of African natives; volcano gods; volcanos

First Line of Dialogue or Text
As Fantomah bends over a waterhole to drink...
Genre
jungle
Characters
Fantomah; Holu; Fury (leopard); Ilog
Synopsis
Fantomah is accused of poisoning a native village. Her investigation reveals that their water originates in a mountain stream that is contaminated by a dead mammoth. She uses her magic to cure the villagers and they seek a new water source.
Keywords
cavemen; lost valleys; mammoths; sabre-toothed tigers; stereotyping of African natives; water contamination; witch doctors

First Line of Dialogue or Text
You're sitting on top of the world now, Andy, but it's awfully high when you start falling!
Genre
adventure
Characters
Terry Thunder; Anderson the Arab; Kismet; Vincent
Synopsis
Anderson gets rich in diamonds and decides to go to America, but he is dissuaded when his passenger liner is attacked by airplanes.
Keywords
diamond mines; S.S. Aquamania; sand wagon; slavers; stereotyping of African natives; treasure maps; World War II

First Line of Dialogue or Text
Joan Wells travels along a river near the little coast town which is her home...
Genre
animal; jungle
Characters
Simba; Joan Wells; Bill Walker
Synopsis
Simba is captured by hunters but manages to save them from a cheetah. He then leads them to a village where a white woman is held captive.
Keywords
snares; stereotyping of African natives