Cover code: 754-571. The name for the character "Baba Looey" is spelled "Baba Looie" in all stories in this issue.
Keywords
incorrect character names 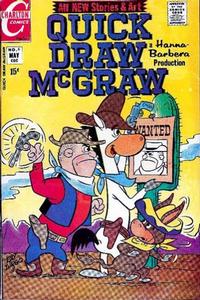 The New Broom (Table of Contents: 5)

Meta Moment: Quick Draw distracts Killer Kenneth to get the drop on him by pointing out an “aerioplane” in the sky! Kenneth: “That wasn’t fair! Aerioplanes aren’t in this comic book!”

Spending Money and Prizes Get Both Sell Grit (Table of Contents: 6) (Expand) /

The Great Man (Table of Contents: 9)

A Rare Disease (Table of Contents: 10)

This story would appear to not be original Charlton material, unlike the stories in this issue by Joe Gill and Ray Dirgo, but one originally prepared for the foreign market. Dialogue is plain and straight-forward, presumably for ease of translation into other languages. Layout follows that of Hanna-Barbera comic stories created by Western Publishing – four-tiers per page.

Now You Can Finish High School at Home (Table of Contents: 19) (Expand) /