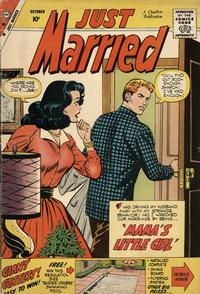 Job Number
5490
Genre
romance
Characters
Sharon; Jim Slade
Synopsis
Sharon gets married to Jim but has trouble living away from her mother.

Synopsis
Contest to name an elephant/pig/man character and win prizes.

Too Beautiful (Table of Contents: 3)

Job Number
5568
Genre
romance
Characters
Karen Starr; Mason Brooks; Tony Evans
Synopsis
Karen Starr, a successful model, runs into Tony Evans at an art gallery. They fall in love, but when he realizes she is a successful model they almost split up. She asks him to marry her and agrees to his conditions, that she quit her job and move out of her Park Avenue apartment so that he can support her on his writer's salary.

One of the Finest (Table of Contents: 5)

Job Number
5483
Genre
crime; romance
Synopsis
Dan, a police detective, spots a crook when he is on his honeymoon and gets involved in arresting him.

A Tragic Evening (Table of Contents: 7)

Job Number
5775
Genre
romance
Characters
Bill; Mona
Synopsis
Mona gets asked to a formal party by Bill but doesn't have a dress to wear.

Possible D'Agostino art per Nick Caputo, May 2014. Artwork on this story is more "cartoony" than other stories in this issue.