[Star vs. Car] (Table of Contents) 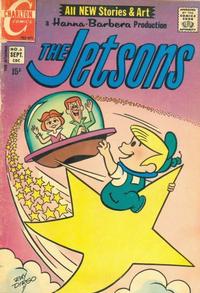 This story is an almost panel-for-panel remake of the story “The Forget-Me-Duck” from Donald Duck (Western, 1962 Series) #114 July 1967, with Donald Duck as the well-intentioned but forgetful bumbler who receives the memory of an elephant, to the very same awkward and disastrous results. While the original Donald Duck version of this story is 7 four-tiered panel pages, and the Jetsons remake is similarly laid-out to 8 pages, they are essentially the same, beat-for-beat, but with individual Duck-specific references now changed to Jetsons-specific references.

Gummed Up (Table of Contents: 8)

Legion of the Clean (Table of Contents: 10)

Rosey the Traitor! (Table of Contents: 11)

The Best Baseball Game Cannot Be Purchased in a Retail Store! (Table of Contents: 15) (Expand) /

Now You Can Finish High School at Home (Table of Contents: 17) (Expand) /