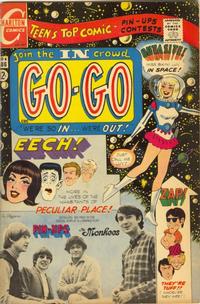 Inside front cover. The caption is improperly punctuated.

Our Magnificent Men and Their Flying Machine (?) [sic] (Table of Contents: 2)

Job Number
B-820
Genre
satire-parody; teen; humor
Characters
The Modkees (see Notes) [Henry; Otto; Gabby; Alf]
Synopsis
While the other three dance with the girls at the beach, Alf goes to buy a used car and ends up with a World War I vintage biplane.
Keywords
beach; bi-plane; fog; lighthouse; Monkees; used cars

Title is taken from then-current movie "The Magnificent Men in Their Flying Machines."
At this point, the rock band starring in this story was still unnamed (and were called "The *" as a placeholder). The results of the contest to name them "The Modkees" will be announced in issue 9.

Genre
humor; teen
Characters
Snow What; Harvey Prince
Synopsis
A parody of the Snow White story, with Snow What being the singer of a rock band and being targeted by a jealous rival.
Keywords
kiss; mouthwash; New Jersey; New York; newspaper; rock band

A teen advice column with a letter and response dealing with cheating. According to a reference in Sequential Crush by Danny Fingeroth in 2013, Dr. Harold Gluck was a real person. Despite being in a humor comic, the topic was discussed in a straightforward manner.

Job Number
B-846
First Line of Dialogue or Text
In the executive office of Otto Smartzenheimer,[...]
Genre
humor; teen
Characters
Miss Bikini Luv; Otto Smartzenheimer; Max; Ajax
Synopsis
When the star who was going to play the astronaut in the movie "Man on the Moon Beach" gets drafted, Bikini gets put into the part. The prop department accidentally makes a real rocket and Bikini and Ajax blast off.
Keywords
ape; astronauts; bananas; disguise; jet plane; movie; NASA; parachute; rocket; spacesuit

First Line of Dialogue or Text
From a high, stony tower adjacent to a quaint little cottage in Brooklyn, N.Y.,[,,,]
Genre
humor; teen
Synopsis
A girl is kept in a tower in Brooklyn by her wicked stepmother because of her ability to spin straw into dental floss. A singing group offers to set her free, but they require that she sign a contract to become a lifetime member of the group.
Keywords
Brooklyn; contract; dental floss; hair; straw; tower

Part one of two. A merging of the Rapunzel and Rumpelstiltskin fairy tales with a dose of pop music humor.

Job Number
B-882
First Line of Dialogue or Text
The rumor that Peculiar Place, that ordinary little[...]
Genre
satire-parody
Characters
Mr. Beau; P. S. Peculiar; Walter Warlock; Buck Warlock; Warren Furrington; Hermione Rope; Boticcelli
Synopsis
P. S. Peculiar has disappeared and if he isn't found Peculiar Place will be given back to the Indians. The townspeople search the cranberry bogs and find that the disappearance was a plan of P. S. Peculiar to have his cranberries picked for free. Unfortunately for P. S., he is buried under an avalanche of cranberries and swept into Ridiculous Canyon.
Keywords
cranberries; cranberry bogs

Inside back cover. The caption has the same incorrect punctuation as the inside front cover.