First Line of Dialogue or Text
With a turn of this dial, I shall destroy the four of you forever!!
Genre
superhero
Characters
The Fantastic Four [The Invisible Girl [Sue Storm]; The Human Torch [Johnny Storm]; The Thing [Ben Grimm]; Mr. Fantastic [Reed Richards]]; Doctor Doom [Victor Von Doom]
Reprints 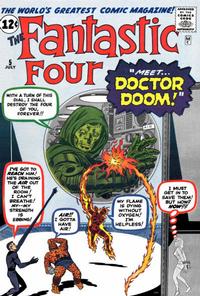 Part 3 On the Trail of Blackbeard (Table of Contents: 8)

Job Number
V-735
Genre
superhero
Characters
The Fantastic Four [The Human Torch [Johnny Storm]; The Thing [Ben Grimm]; Mr. Fantastic [Reed Richards]]; Doctor Doom [Victor Von Doom] (his hand only)
Synopsis
The Thing takes on the role of Blackbeard the Pirate and wishes to remain in the past.
Reprints

The Hulk / promo (ad from the publisher) / 1 page (report information)

Part 5 The Vengeance of Doctor Doom! (Table of Contents: 16)

He's Looking for People Who Like to Draw (Table of Contents: 21) (Expand) /