The Terror of the Toad Men! (Table of Contents) 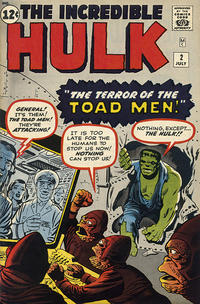 Job Number
V-781
First Line of Dialogue or Text
Like a savage, marauding monster from some mad nether world, the frightening figure of the Hulk suddenly appears from out of the murky swamp...
Genre
superhero
Characters
Hulk [Bruce Banner](origin recap); Rick Jones; Betty Ross; General Thunderbolt Ross; Toad Men (introduction)
Synopsis
The Toad Men are above Earth, in search of its brightest scientist. Meanwhile, Rick and Bruce explore an underground cave where they hope to imprison Hulk each night.
Reprints

Job number from Tom Lammers and Ger Apeldoorn via the Atlas/Timely discussion group. The events of the Incredible Hulk #1 are summarized.

Job Number
V-781
First Line of Dialogue or Text
Do not struggle and you will not be injured -- yet!
Genre
superhero
Characters
Hulk [Bruce Banner]; Rick Jones; General Thunderbolt Ross; Toad Men
Synopsis
The Toad men capture Bruce Banner and bring him to their spaceship.
Reprints

[The Terror of the Toad Men] Part 3: Bruce Banner, Wanted for Treason! (Table of Contents: 7)