The Scorpion Strikes! (Table of Contents) 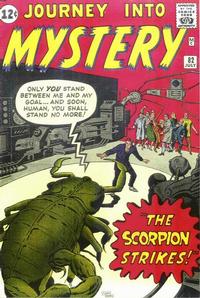 The Scorpion Strikes! (Table of Contents: 1)

Job Number
V-741
Genre
science fiction
Characters
Paul Rodgers; Edward Bentley
Synopsis
A scorpion is mutated by radiation and grows giant, gaining an evil intelligence. It is transformed back with another burst of radiation after being tricked into position by a hypnotist.
Reprints
Keywords
monsters

Job number from Tom Lammers and Ger Apeldoorn via the Timely/Atlas discussion group. Inks per reprint, confirmed by Nick Caputo.

Text story with illustrations. Artist credits from record of Journey Into Mystery #44.

I Am the Prisoner of the Voodoo King! (Table of Contents: 3)

Job Number
V-742
Genre
horror-suspense
Synopsis
A criminal being brought to prison from a jungle outpost escapes into the jungle. He happens upon a tribe worshipping a gold idol and steals it. He escapes his pursuers, but realizes that the idol is cursed: he can never put it down.
Reprints

Narrated in the first person. Job number from Tom Lammers and Ger Apeldoorn via the Timely/Atlas discussion group.

The Next Galaxy (Table of Contents: 4)

Job Number
[V-743 ?]
Genre
science fiction
Characters
Darius Zorr
Synopsis
In the thirtieth century, humanity becomes advanced but emotionless and brutally conquers the galaxy. They send an explorer to the next galaxy to find new conquests, but when he finds a totally peaceful world he is reminded that once some humans sought peace, and so lies to his superiors to protect the people of this world.
Reprints

Take a Chair (Table of Contents: 5)

Job Number
V-744
Genre
science fiction
Characters
Gorgi Gruff; Adam Able; Mr. Vort
Synopsis
A furniture maker gets more than he bargained for when he attempts to eliminate a rival chair producer and finds out he is an alien in disguise creating robotic spies on humans.
Reprints

The last page includes an advertisement for Amazing Adult Fantasy (Marvel, 1961 series), also by Lee and Ditko. Job number from Tom Lammers and Ger Apeldoorn via the Timely/Atlas discussion group.