Distributed to newstands in April 1962. This issue includes 10 pages of paid advertisements.

Cover inks credit from Nick Caputo via the GCD Errors list, February 2009. Original indexer had not supplied an inker credit. 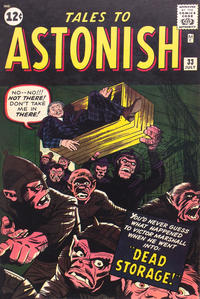 Job Number
V-705
First Line of Dialogue or Text
Look carefully at this man...
Genre
science fiction
Characters
Victor Marshall; Koru
Synopsis
A burnt-out actor stumbles upon an alien invasion, and gives the best performance of his life to save Earth.
Reprints

The third and sixth pages include advertisements at the top and bottom tiers for the Incredible Hulk ("Have You Seen the Hulk?"; "The Hulk is Coming!"). The last page includes an advertisement for the Fantastic Four, ("You've never read a comic like The Fantastic Four! Get your spine-chilling copy today!)

The Comic (Table of Contents: 2)

Job Number
[J-214]
First Line of Dialogue or Text
Stan Wepp stood before the lights, watched the teleprompter, the studio...
Genre
fantasy-supernatural
Characters
Stan Wepp
Synopsis
A bored television comedian is mysteriously transported back to the small mining town and small theatres that he loves.
Reprints

The Frightened Man! (Table of Contents: 3)

Job Number
V-706
First Line of Dialogue or Text
How would you like to escape from the worries and fears of this atomic age?
Genre
science fiction
Characters
John Bentley
Synopsis
A scientist tries to use a time machine to escape the dangers of the modern world, but he finds that every era has its dangers.
Reprints

This story seems to be a retelling of "Time Machine", a text story first published in Mystic (Marvel, 1951 series) #57 (March 1957) and reprinted many times subsequently; it shares the same structure and moral, though the motive for building a time machine is different. The second and fourth pages include advertisements for the Incredible Hulk (Marvel, 1962 series).

The Voice of Fate! (Table of Contents: 4)

First Line of Dialogue or Text
Can a man control his own destiny?
Genre
horror-suspense
Characters
Walter Krugg
Synopsis
The Fates make a wager over whether humans will ever understand that they cannot escape them. One of them tells a jewel thief that he will be punished, but he defies fate and flees the country, thinking that since the US is in World War II he will never be found and punished in Hiroshima.
Reprints

This story is a retelling of "Mister Black", drawn by Gene Colan in Strange Tales (Marvel, 1951 series) #93 (February 1962) with an American protaganist instead of a Japanese one. The second and fourth pages include advertisements for the Incredible Hulk (Marvel, 1962 series).

The Absent-Minded Professor! (Table of Contents: 5)

Genre
science fiction
Characters
Professor Blank
Synopsis
A college professor is certain that life exists upon other worlds, but can't quite remember why he is so assured of this fact. One evening he is abducted by aliens and he receives his answer. The aliens tell him the reason for his abduction is that years ago the aliens sent a spy to Earth, but failed to hear back from him, and the captain of the spaceship realizes that he should not have sent an absent-minded spy. The professor realizes that he is the alien spy.
Reprints