Cover images taken from inside stories. 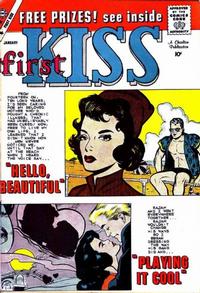 Playin' It Cool (Table of Contents: 1)

Job Number
5262
Genre
romance
Characters
Laurie; Roger "Rajah" Gates; Anne; Jimmy Ellis; Laurie's father; Laurie's mother
Synopsis
Mousy 16-year-old Laurie comes out of her shell and begins dating Rajah, a “wild” young man. Her parents don’t approve, and they prevent her from eloping with him. “He acted tough…but he’s a phoney!” Laurie agrees to conform to her parents’ expectations from now on.

The bottom image on the cover (with different coloring) is taken from a panel in this story.

The Necklace (Table of Contents: 2)

Job Number
6004
Genre
romance
Characters
Don; Cecilie; Don's mother
Synopsis
Don’s mother, a “society queen,” gives him a necklace so he can propose to Cecile, even though she’s “from a poor family.”

This story appeared in several Charlton romance titles during this era.

Job Number
6005
Genre
romance
Characters
Alan; Marie
Synopsis
Marie and Alan have broken up, but she signals that she wants him to call her by leaving her makeup compact (in the shape of a telephone dial) on a soda fountain counter.

Too Young To Marry? (Table of Contents: 5)

Job Number
5969
Genre
romance
Characters
Amy; Mr. Alison; Mrs. Alison; Amy's mother; Danny Alison
Synopsis
Amy was unable to have a social life for years because she was caring for her invalid mother. When her mother recovers, Amy decides to rebel against her “nice girl” image. Danny calls her bluff: he knows she’s not that way and he loves her.

The top cover image (with different coloring) is taken from a splash page panel in this story.

Job Number
5660
Genre
romance
Characters
Tom Ford; Molly; Ruth Miller
Synopsis
Ruth begins to date co-worker Tom, but breaks up with him when she sees him in the company of another woman. She walks away and Tom calls her back: it’s actually a talking mynah bird he bought her as a present, but that’s good enough. They reconcile.

A Good Life (Table of Contents: 9)

Job Number
5729
Genre
anthropomorphic-funny animals; romance
Synopsis
A dog is jealous when his owner meets a woman in the park. However, the woman has a French poodle and the dog thinks “this may not be so bad.”

An unusual story taking place from a dog's point of view.