Credits per Nick Caputo. Cover appears to be either taken from interior panels or based on the inside art. 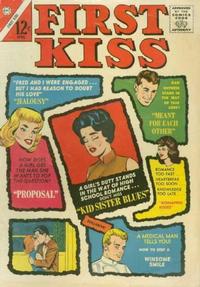 The Proposal (Table of Contents: 1)

Job Number
A-1892
Genre
romance
Synopsis
Lew and Donna are head-over-heels in love with each other. Everyone understood a proposal was inevitable. Tonight was going to be the night. But Lew needs a little help.

Both of the left-side cover images (the blonde girl's face and the couple kissing) are taken from panels in this story (with different coloring).

Meant For Each Other (Table of Contents: 2)

Job Number
A-2091
Genre
romance
Synopsis
Guy Chappel and Laurel Anderson were attracted to each other at once. But both are so painfully shy that each finds it impossible that the other would be interested. It takes some help from Laurel's friend, Marie, to get them together.

The top-right head shot of the man on the cover (with different coloring) is taken from a panel in this story.

A Winsome Smile (Table of Contents: 3)

The bottom-right head shot on the cover is taken from a panel in this story.

Job Number
A-2101
Genre
romance
Synopsis
Linda has a whirlwind romance with Griff Hollis, but eventually loses touch with him. Then Griff starts seeing Ruth. Joel Carter helps Linda in a scheme to try to make Griff jealous.

The right-side head shot of the girl on the cover is taken from a panel in this story.

Job Number
A-2105
Genre
romance
Synopsis
Ed Martin is the most popular boy in school, but doesn't seem to notice that Phyllis is alive. When Phyllis arranges to get a date with Ed, she finds out it conflicts with a baby-sitting obligation for her little sister on the same night.

The central image on the cover (with different coloring) is taken from a panel in this story.

The Secret Of Love (Table of Contents: 6)

Genre
romance
Synopsis
John Norton asks Rita Hadland to marry him. But he has to go away for one year first, and John can't tell Rita where he is going.

Job Number
A-1998
Genre
romance
Synopsis
Alice and Fred are engaged to be married, but Alice feels insecure and imagines that Fred is looking at other girls and regretting the fact that he proposed to her.

The American Way! (Table of Contents: 8)

Page was published in various Charlton titles of the period.