All information for this issue provided by Ger Apeldoorn (March 2011), unless otherwise indicated.

The four images on the cover each represent an inside story. 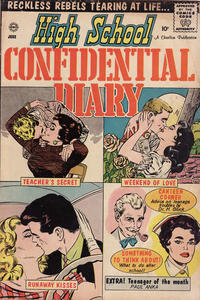 Something to Think About (Table of Contents: 2)

Job Number
6402
Genre
non-fiction; advocacy
Synopsis
High school students are advised to think about going to college and what to study there.
Reprints

Job Number
6383
Genre
romance
Characters
Fred; Tina; Hal
Synopsis
Tina and her friends hang out the local "teen canteen," but her older brother Hal doesn't like Tina's boyfriend Fred because "he's wild!" Fred urges Tina to elope with him, but she decides not to, and breaks up with him.

Weekend of Love! (Table of Contents: 5)

Job Number
6330
Genre
romance
Characters
Helen Darby; Penny Hill; Nancy Parks; Bob Nugent; Gary Hicks; Mrs. Bates
Synopsis
Helen and Penny visit Coles Military College, where their boyfriends Gary and Bob are enrolled. They expect the boys to propose to them that weekend. However, when they arrive Nancy--another guest--says Bob and Gary dated her friends recently. Helen and Penny are jealous and suspicious of their boyfriends, but Bob and Gary explain that they dated Nancy's friends because the girls' dates had the flu. Helen and Penny get their engagement rings.

Teen-Ager of the Month Paul Anka (Table of Contents: 6)

Don Costa was a real-life record producer who is credited for "discovering" Paul Anka.