Indexed from a scan from http://digitalcomicmuseum.com/index.php. 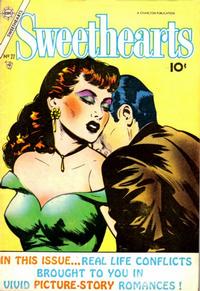 Genre
romance
Characters
Vivian Emery; Sheila; Hank Chapman; Robert Emery; Mrs. Chapman
Synopsis
Vivian’s father gives her some rental properties to manage, and she discovers childhood friend Hank lives in one of them with his family. They fall in love, and Vivian offers to let Hank’s family live rent-free while he finishes law school. Vivian doesn’t like associating with Hank’s friends or family, and he breaks up with her. She evicts the tenants as a result. However, when her father gives a speech about his own humble origins, Vivian rescinds her eviction order and reconciles with Hank.

My Secret Sin! (Table of Contents: 2)

Genre
romance
Characters
Ken Marshal; Jean Ferris; Nicky Beyers; Myra; Larry
Synopsis
Jean is left alone while her fiancé Ken works on his master’s degree. She begins dating Nicky and breaks up with Ken when he finds out. Jean then realises she doesn’t love Nicky. When he’s accused of theft, Nicky says Jean was his accomplice. Ken gives Jean an alibi and they get back together.
Reprints

Ken's last name is "Marshal" on the first page, but on the last page of the story he's called "Ken Miles" twice.

And Be My Love (Table of Contents: 3)

Night of Retribution! (Table of Contents: 5)

Genre
romance
Characters
Claire; Ann; Roger; Chuck; Nina; Frank; Fred
Synopsis
Secretary Claire intends to marry wealthy Fred, but dates Chuck and Roger in the meantime. Roger becomes angry when he catches Claire with Chuck. Claire breaks up a romance between co-workers Frank and Nina, and Nina vows revenge. Claire convinces wounded veteran Fred to pay for expensive renovations to the house she lives in, then tells him that she doesn’t want to marry him after all, since he’s an invalid and not rich any more. Coming home from work one night, Claire feels one of the people she’s harmed is stalking her: she’s wrong, but will always live in fear and guilt.

"Roger" has red hair on page 3 but on page 4 he has black hair and even looks different.

My Brief Encounter! (Table of Contents: 6)

Genre
romance
Characters
Julius; Sylvia; The Great Cardini; Detective Bradock
Synopsis
On a cross-country train trip to meet her fiancé Julius, Sylvia is captivated by Cardini, a handsome stranger. She’s rescued by the police, who explain that Cardini is a serial killer. Sylvia is reunited with Julius, and hopes he never learns about her narrow escape.