Distributed to newstands in June 1962. This issue includes 10 pages of paid advertisements. 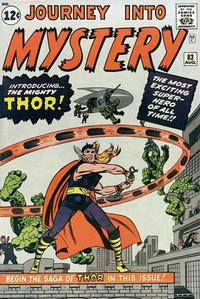 The Stone Men from Saturn! (Table of Contents: 1)

Job Number
V-786
First Line of Dialogue or Text
The legend has come true!
Genre
superhero
Characters
Thor [Doctor Donald Blake] (introduction, origin); Gorr; Kronans; Korg
Synopsis
A lame doctor vacationing in Norway runs across an alien invasion. While hiding from the aliens in a cave he finds an old cane that transforms him into the god Thor. Thor drives back the alien invasion.
Reprints

This is the first Thor story published by Marvel. Story is divided into three parts: Part One—Untitled (5 pp), Part Two—"The Power of Thor!" (5 pp) and Part Three—"Thor the Mighty Strikes Back!"(3 pp).

The story is expanded and retold in Thor: First Thunder (Marvel, 2010 series) #1.

Job Number
[K-479]
First Line of Dialogue or Text
Before Chauncey set out for the Hotchkiss Fair, he took his rinky-dink car into the gas station.
Genre
fantasy-supernatural
Characters
Chauncey; Zeke; Muscles Magee
Synopsis
A scrawny man is given a magic candy bar that confers great strength, but he discovers that he already posesses more strength than he suspects.
Reprints

The Perfect Crime! (Table of Contents: 3)

Job Number
[V-787 ?]
First Line of Dialogue or Text
Our study in fantasy begins calmly enough!
Genre
science fiction
Characters
Mike Morgan
Synopsis
A crook tries to kill and rob a man by pushing him off a cliff, but finds that he is a flying man from Mercury.
Reprints

When the Jungle Sleeps (Table of Contents: 4)

Job Number
V-788
First Line of Dialogue or Text
In the mysterious unknown jungle, who knows what fantastic secrets are hidden from the eyes of mortal men??
Genre
science fiction
Synopsis
A lion is given superhuman intelligence by a nuclear test. It plans to attack humanity, but quickly loses its enhanced intelligence.
Reprints
Keywords
atomic test

Script and Letters credit is from The Mighty Thor Comics Index #5 by George Olshevsky.