Distributed to newstands in May 1962. This issue includes 10 pages of paid advertisements. 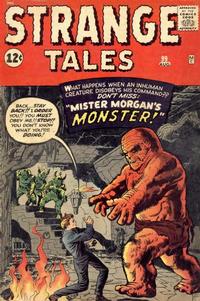 Genre
science fiction
Characters
Philip Morgan; Mrs. Morgan
Synopsis
Humanoid robots are banned, but their inventor keeps one in secret, and aliens try to turn it against humanity. It resists and they are forced to flee, but the robot’s inventor thinks that it disobeyed him by leaving hiding, not knowing that it saved humanity.
Reprints

The Day Before Doomsday! (Table of Contents: 3)

Genre
science fiction
Characters
John Peterson; Premier Zorkon
Synopsis
A US scientist defects to the USSR and builds a large dome to protect their leaders from retaliation, allowing a massive strike on the US. The dome is really a pod to launch them into space.
Reprints

The Man in the Glass Cage! (Table of Contents: 4)

Genre
horror-suspense
Characters
Joe Phelps; Anita Rogers; Bob
Synopsis
A sound engineer tries to kill a girl who spurned him using sound waves. When they fail, he is confused, and, is killed by the waves which didn't affect the secretly hard-of-hearing girl.
Reprints

A Switch in Time! (Table of Contents: 5)

Genre
science fiction
Characters
Karl Kargon
Synopsis
In the year 2050 a prisoner reads about the invention of a time machine and so breaks jail to return to the past to rub out the one witness to his crime. However, as he attempts to assault the man, he realizes that he has been rendered intangible like a ghost so as to be unable to effect any change in the course of events.
Reprints