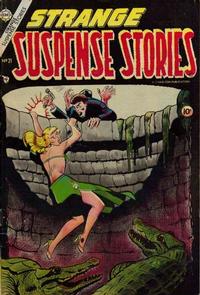 Genre
horror-suspense
Synopsis
An Arabian tyrant uses sleep-deprivation to torture his opponents and find out about assassination plots about him. Some day something out of the ordinary happens.

The Well of Fear! (Table of Contents: 2)

Genre
crime; horror-suspense
Synopsis
Bankrobbers Logan and Sellis get trapped in an old well and can't get out. They mistrust each other and won't help the other to escape. They both perish miserably.

Genre
horror-suspense
Synopsis
Gustav Perrin steals a miniature atom bomb, but loses it to a suicidal stranger who jumps off a building with it. The jumper, however, has a parachute and does an advertisement stunt.

Reader's solution to write-in-contest for a new ending from "Strange Suspense Stories" #19 (July 1954).

Sam the Seer (Table of Contents: 4)

Genre
crime; horror-suspense
Synopsis
Sam Snittleman can foresee the future. He knows that a crime mobster will kill him. When he does, Snittleman returns from the dead as "Mr. Vision" and leads the police to his murderers.

This Bite is Sweet! (Table of Contents: 5)

Genre
horror-suspense
Synopsis
Peter North is a vampire. He settles down in a village in the Pyrenees and terrorizes the good people. When he meets the lovely Monique, North is torn between love and blood lust.

The Mark of the Ripper! (Table of Contents: 6)

Genre
crime; horror-suspense
Synopsis
Police detective Baird has to bring down the "Ripper", a knife-wielding maniac on the loose. Following the clues Baird is confronted with the fact that he himself is the "Ripper".
Reprints

First page of the story has a "Steve Ditko-ish" appearance to the art.

No Questions Asked (Table of Contents: 7)

Genre
horror-suspense
Synopsis
Dr. Hurtt needs fresh cadavers for his anatomy sessions. When he gets blackmailed he decides to commit a murder and thus kill two birds with one stone.

Write-in contest for readers to contribute an ending to this story.