The hands are the only clue to a most probable McKell credit. 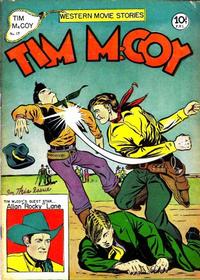 The drawing is very similar to McKell's signed story in #19 and 21.

Marshal of Amarillo (Table of Contents: 7)

Possibly drawn by Sherman, when compared to his signed story in #19, but uncertain, since the work is so peculiar.

Adapted from the Republic Picture "Marshal of Amarillo".

Home on the Range (Table of Contents: 8)

Genre
western-frontier
Synopsis
Lyrics of the song Home on the Range.

Drawing could be DeMarco or Lee Sherman.