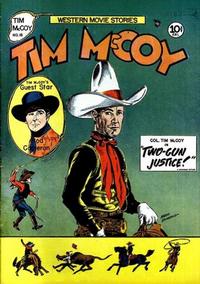 Genre
western-frontier
Characters
Tim Hayes [El Voltage] (Texas Ranger); Bart Kane (outlaw); Kate
Synopsis
The stage carrying gold bullion is held up by Bart Kane and his gang, and Tim Hayes is sent out to clean out the gang. He disguise himself as a Mexican

The drawing is very similar to McKell's signed story in #19 and 21.

Adapted from the Monogram film of the same name.

First Line of Dialogue or Text
The cowboy is the most picturesque character in the history of the United States.
Genre
non-fiction; western-frontier
Characters
Tim McCoy
Synopsis
Clearing up the meaning of some western words.

First Line of Dialogue or Text
The "Stetson," "John B.," "conk cover," "sombrero," "hair-case," or better known to Easterners as hat is the cowboy's most useful bit of clothing and trademark.
Genre
non-fiction; western-frontier
Characters
Tim McCoy
Synopsis
A series of western facts and stories.

First Line of Dialogue or Text
Don't be too sure o' yo'self Pecos, yo' know that life is full o' little drawbacks!
Genre
humor; western-frontier
Characters
Pecos Bill; Dirtyfoot Joe; Goodhearted Joe
Synopsis
Pecos Bill has the fastest horse, but Dirtyfoot Joe aims to win the race just to save his ugly face.

The Plunderers (Table of Contents: 8)

Adapted from the Republic Picture movie of the same name.

The splashpage is drawn from movie photos, and it doesn't looks like the work on the rest of the story, which has a resemblance to Lee Sherman's signed stories in #19 and 21. The craftmanship is such that it could in fact have been done by just anybody with no skill at all, so Lee is not certain, but the nearest possible.