Photo is probably from "Her Favorite Patient," the 1950 re-release title of "Bedside Manner" (1945). The indicia indicates the cover photo is "Courtesy Astor Pictures Corporation," which was the re-release distributor. 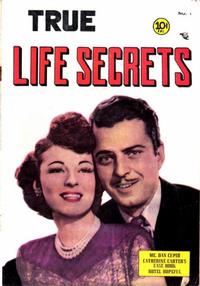 First Line of Dialogue or Text
Honestly, Judy, if you weren't my best friend I'd tell you what a drip I think you are!
Genre
humor
Characters
Trudy; Judy
Synopsis
Trudy and Judy argue with each other until their principal remarks how alike they are; then they decide they're both wonderful.

First Line of Dialogue or Text
Here I am again, folks - and of all places to be, I have to turn up in Hollywood!
Genre
fantasy-supernatural; romance
Characters
Robert Tyler; Dan Cupid; Mary Brown; Mr. Davis
Synopsis
Mary is fired from her newspaper job after writing a hostile article about obnoxious romantic movie star Robert Tyler. However, her editor changes his mind when Robert complains, and tells Mary to take a month’s vacation with pay until things cool off. Dan Cupid encourages Mary to have a makeover and she attracts Robert’s attention. Cupid’s plans succeed: Robert and Mary fall in love and get married.

This feature had previously appeared in Charlton's "Pictorial Love Stories" in 1949-50.

First Line of Dialogue or Text
Yes, I'm one of Aunt Mike's star boarders -
Genre
romance
Characters
Anne Bishop; Jeff Bishop; Helen Mathews; Mr. Laveck; Doris; Ruth; Mr. Lansing
Synopsis
Aspiring actress Ann lives in the Hotel Hopeful with other young women. Ann’s brother Jeff visits her and they rescue waitress Helen from her abusive boss. Helen moves into the Hotel Hopeful and falls in love with Jeff. However, she accepts a contract to appear in a play rather than marry him, because she feel indebted to her fellow residents and can now help them get jobs. After a time, Helen quits the play and marries Jeff; Ann gets her role and is a success.

"Anne" is spelled "Ann" on some pages.

The Promotion (Table of Contents: 4)

First Line of Dialogue or Text
Thousands of letters cross Catherine Carter's desk, most of them seeking...
Genre
romance
Characters
Barbara Vance; Catherine Carter; Mary; Victor Kurtin; Bob Talbot
Synopsis
Advice columnist Catherine Carter gets a letter from Barbara, whose locksmith boyfriend Victor is being forced to participate in robberies by a gang. Barbara says she’ll kill the crooks to save Victor, but when he arrives Catherine discovers Victor is himself a vicious criminal and is willingly helping the gang. Detective Bob questions Victor but Barbara gives him an alibi. Catherine and Barbara follow Victor and see him shoot a man during a robbery. Victor takes the two women hostage but Bob and the police arrive and save the day. Bob and Barbara are soon married.

This feature had previously appeared in Charlton's "Pictorial Love Stories" in 1949-50.

Life of the Party (Table of Contents: 6)

Genre
romance
Characters
Kay; Edith; Pete Nolan; Mrs. Paine
Synopsis
Kay and her cousin Edith are college students who work in their spare time. Kay is a carhop and dates bank employee Pete. Strait-laced librarian Edith doesn’t approve of such frivolity and constantly nags Kay; she later tells Kay’s father that Kay is living indecently, causing him to order her to leave school at the end of the year. Edith steals Pete away from Kay, but when Kay has a breakdown, Pete catches Edith gloating and realizes what sort of person she is. Pete and Kay reconcile.