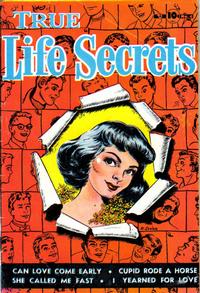 First Line of Dialogue or Text
By the way Trudy...
Genre
teen
Reprints

On inside front cover. Black-and-white. Character not related to the comic strip "Trudy".

Genre
romance
Characters
Eileen; Rudy; Fred Snell; Irma
Synopsis
Resort waitress Eileen rejects the love of busboy Rudy, hoping to snare "a wealthy young man...who can take me away from this monotonous life!" She dates wealthy guest Fred, but when he takes her to some sleazy tourist cabins in anticipation of sex, she runs away. Rudy arrives and punches Fred. Eileen says she doesn't care if Rudy is just a busboy, she loves him--then he reveals that his father owns the resort, so she gets both love and money.

She Called Me Fast (Table of Contents: 3)

We Didn't Want the Same Kind of Love (Table of Contents: 4)

Fall Into Love (Table of Contents: 5)

Genre
romance
Characters
Susan Graphis; Peter Winters; Chris; Miss Downes; Hazel
Synopsis
Susan and Peter are sharing an elevator when it crashes. They are unhurt and eventually fall in love. While at a carnival, Susan sees Peter kissing a showgirl and jealously leaves. Peter later apologizes, saying the showgirl was just kissing him impulsively after he had sketched her. Peter and Susan reconcile.

Genre
romance
Characters
Phyllis Dawson; George Duval
Synopsis
Hoping to meet a rich young man, Phyllis goes riding regularly in the park. One day she encounters George; they date and fall in love, even after she's confessed her scheme. Phyllis later learns he is wealthy and thinks he's been mocking her. George says he truly loves her and they will wed.

I Yearned for New Love (Table of Contents: 7)

Genre
romance
Characters
Fran Devin; Joe; Ted Malloy
Synopsis
Fran and Joe are longtime friends but she breaks up with him because he takes her for granted and is too possessive. She meets amateur photographer Ted and models for some contest photos. Joe angrily breaks in but Ted handles him easily and now Fran and Ted are a couple.

Inside back cover, black and white. The bottom half of the page is ad advertisement.

The largest of the spot illustrations appears to be by the same artist who did the inside front cover (signed "Sweet"--inside back cover not signed).